Juicing vs Blending: Similarities and Differences

by JuiceFeaster // in Juicing Tips & Tricks

Juicer Test Kitchen is reader supported - by purchasing through our links, we may earn a small commission.

There’s no question that getting more fruits and vegetables in our diet is great for overall health. Both juices (from juicers) and smoothies (from blenders) are two great ways people can get a lot of those into their bellies, but which is best for you? Let’s take a look at juicing vs blending to see how each one stacks up.

The similarities of juicing and blending are pretty straightforward.

Both forms take solid produce and turn it into a liquid that we can drink (or spoon if your smoothie is really thick). The reason we do this is to get more produce into our systems than we could if they were eaten whole. In both, we physically break down the long fibers that give produce its structure. This allows us more easily consume and digest the resulting beverage.

This is tied to the liquifying process above. The more produce we can consume, the more nutrients we are able to ingest. This process gives us more bang for the buck, as it were, by concentrating the amount of nutrients in a serving of juice or smoothie.

In both blending and juicing we use the technique of blending ingredients together to create flavor and nutrient combinations that we may not otherwise consume in one sitting. While you may not sit down to a bowl full of chopped kale, peaches, cucumbers, blueberries, parsley, and a lemon; throw those babies in a blender or juicer and you’ll have yourself a tasty combination.

Both processes break down the fiber (both soluble and insoluble) found in fresh fruits and vegetables, granted to varying degrees. Blending holds onto both types of fiber while juicing removes some (but not all) insoluble fiber while leaving all the soluble fiber intact. We’ll talk more about this under the differences below.

Some of the differences between juicing and blending are equally straightforward, but a few may surprise you.

Both juicing and blending result in varying levels of nutrients both present and retained in the resulting beverage. For density, juicing wins out by the fact that this process provides more nutrients by volume through the separation of the insoluble fiber from the nutrient-laden juice.

This is a bit more nuanced than nutrient density and depends upon the type of machine being used. In general, blending is a much faster process that whips increased amounts of oxygen into each batch. Oxygen exposure causes oxidation, which breaks down nutrients. Some types of juicers (centrifugal) incorporate more oxygen than others (masticating/cold press and hydraulic), but overall preserve more of the nutrients found in the produce.

There is a noticeable difference between the fiber concentration of juice versus blending. Blending, of course, has all the fiber (both soluble and insoluble) that the added produce had to begin with, albeit in a broken-down form.

Juicing, however, does not strip fiber completely, not even insoluble. When you juice, the majority of the insoluble fiber is removed. (Many of us use this leftover pulp in recipes like crackers or soup, but that’s an aside.) Juice retains some insoluble fiber and all of the soluble.

When doctors prescribe clear liquids for the infirmed, there’s a good reason for that. They want the patient’s body to concentrate on healing and not digestion. When we consume foods in the form of pure liquid, it gives our system a rest and allows the body to do some internal housekeeping. While blended produce results in a liquid beverage, it still has all the fiber present which makes it harder to digest than pure juice.

Back to the discussion around fiber. As stated above, both processes retain all or some (blending more than juicing). The presence of fiber affects the absorption of nutrients differently, with some requiring it and others being slowed or removed by it.

With juice, there is enough fiber to facilitate absorption. Even for some compounds like fructose and sucrose, glucose, and fructose (natural sugars found in fresh fruits and vegetables), absorption into the bloodstream is quicker than with fiber-rich smoothies.

There are simply some varieties of fresh produce that cannot be juiced. Think low-water fruits like bananas and avocados. These can be easily blended into a smoothie or added to fresh juice, but they cannot be juiced themselves. Conversely, some produce tastes better juiced than blended, like citrus (unless you’re a true pulp lover) and pomegranates (with their tiny white seeds becoming gritty when blended).

You can see that there’s no right or wrong answer when it comes to blending versus juicing, it just depends on what results you’re looking for from your produce-packed beverage. No matter which you choose, getting those nutrient-rich, super tasty fresh fruits and vegetables into your body is a great way to live.

Juicer Test Kitchen Pro Tip: If you’re interested in diving into the world of juicing, check out my article Why Juice? The Beginner’s Guide to Juicing!

Tell us your thoughts about juicing vs. blending in the comments. We LOVE hearing from you! 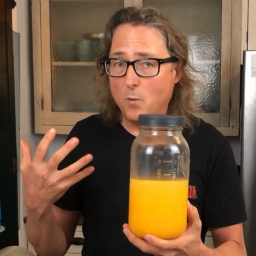 Brett leads the Juicer Test Kitchen. Utilizing his 25 years in the juice production and formulation industry, he brings you expert information on the wide world of juicing. From hands-on juicer reviews, tasty juice recipes, and real-world insights, he helps you get the most out of your juicing experience.

Brett not only has a career background in the juice world, but he is also a lifelong juicing advocate who has personally transformed and maintained his health using the magical powers of juicing and raw living foods.


How To Keep Fresh Juice Fresh?


Juicing vs Blending: Similarities and Differences


Warm Up Your Cold Weather Juicing


Walking in a Citrus Wonderland

The information contained on this website, including but not limited to text, graphics, images, linked materials, or other materials, are for informational and educational purposes only. No material on this site is intended to be a substitute for professional medical advice, diagnosis, or treatment.

Always seek the advice of a physical or other qualified healthcare professional with any questions you may have regarding a medical condition or treatment and before undertaking a new healthcare regimen. Never disregard professional medical advice or delay seeking it because of something you have read on this website or in any linked materials. If you believe you are experiencing a medical emergency, contact the appropriate emergency services immediately.

Please log in again. The login page will open in a new tab. After logging in you can close it and return to this page.